When it comes to greenhouse-gas emissions, Energy Secretary Steven Chu sees Americans as unruly teenagers and the Administration as the parent that will have to teach them a few lessons. 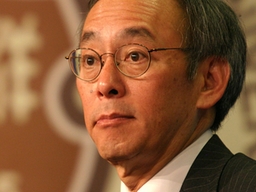 Speaking on the sidelines of a smart grid conference in Washington, Dr. Chu said he didn’t think average folks had the know-how or will to to change their behavior enough to reduce greenhouse-gas emissions.

“The American public…just like your teenage kids, aren’t acting in a way that they should act,” Dr. Chu said. “The American public has to really understand in their core how important this issue is.” (In that case, the Energy Department has a few renegade teens [4] of its own.)

And to make us better people, the EPA is going to be explaining to us how we should act starting with actual children:

The administration aims to teach them—literally. The Environmental Protection Agency is focusing on real children. Partnering with the Parent Teacher Organization, the agency earlier this month launched a cross-country tour [5] of 6,000 schools to teach students about climate change and energy efficiency.

“We’re showing people across the country how energy efficiency can be part of what they do every day,” said EPA Administrator Lisa Jackson. “Confronting climate change, saving money on our utility bills, and reducing our use of heavily-polluting energy can be as easy as making a few small changes.”

Still, Secretary Chu said he didn’t think that the public would throw the same political temper tantrum over climate legislation has has happened with the healthcare debate.

And why is that? It should be because we only need to make a “few small changes.” But Chu has a better explanation for why we’re all going to go along. It’s good for us:

Asked if he expected a town-hall style pushback, Dr. Chu said he was optimistic the public would buy the administration’s arguments that energy efficiency and caps on greenhouse-gas emissions will spark an economic rebound.

The story has an update:

An update: Energy Department spokesman Dan Leistikow added: “Secretary Chu was not comparing the public to teenagers. He was saying that we need to educate teenagers about ways to save energy. He also recognized the need to educate the broader public about how important clean energy industries are to our competitive position in the global economy. He believes public officials do have an obligation to make their case to the American people on major legislation, and that’s what he’s doing.”

Boy ami glad I don’t have Dan Leistikow’s job. Very credible defense don’t you think? Here’s what he should have said: