Since I published my article [4] Friday about the ongoing, Australia-style “lockdown” experiment being run in a small patch of southeastern Connecticut, messages keep piling up in my inboxes from the exasperated college students who have found themselves the experiment’s unwilling subjects. Uniformly, they are very thankful for the coverage, which is certainly not being provided by their tediously predictable in-house campus newspaper. Last I checked [5], even as the entire student body was being shoehorned by Administrative edict into mass quarantine, the lead story in that newspaper was a tidy little PR writeup of the College’s noble search for a new “Dean of Institutional Equity and Inclusion.” Talk about “burying the lede”…!

Whatever your pre-existing views regarding the merits of an ungodly expensive private liberal arts education, it’s still easy to sympathize with students who, through no real fault of their own, have been foisted into the comically dystopian position of paying approximately $80K per year to be confined to their dorm rooms, barred from visiting friends, and forced to endure yet another dreary round of ad hoc Zoom lectures.

Do we really suppose that the vested interests which have likewise found such a lucrative market opening with COVID — notably the “endless testing” industry, including the elaborate “surveillance testing [6]” regime that Connecticut College students must submit to — are just going to wind down their operations voluntarily? “Time to call it a day, folks?” Or is the bureaucratic/financial momentum of these initiatives going to assure that they effectively become permanent fixtures of daily life? (I’ve been doing some reporting on the “testing industrial complex,” which is undergoing a post-9/11 style renaissance as we speak, so be on the lookout for that soon.

“Biden’s Vaccine Mandate Is the Latest Sign of the Presidency Becoming a Monarchy” – so reads the headline of the latest from Reason‘s J.D. Tuccille [7].

Noah Carl – with help from my favorite t.v. program of all time – describes the political ‘(il)logic’ of Covid lockdowns [8]. A slice:

When I asked [9] Philippe Lemoine why lockdowns were implemented with so little regard for costs, he suggested that politicians didn’t want to “leave themselves open to the accusation of not having done anything to curb the epidemic”. They had to do something, even if that something ended up causing more harm than good.

This fallacy was popularised [10] by the much-loved British sitcom Yes, Prime Minister. In the episode [11]‘Power to the People’, Sir Humphrey Appleby is talking to his predecessor Sir Arnold Robinson about the Prime Minister’s plans to reform local government.

The incentives that gave rise to ‘politician’s logic’ in this case are obvious. While the ‘benefits’ of lockdown are immediate and visible, the costs may take months or even years to materialise. (By ‘benefits’, I mean the reduction in social and economic activity that is believed to reduce viral transmission.)

Furthermore, even if lockdown’s impact on mortality turns out to be marginal [12], politicians can claim that things would have been far worse if not for their tough and far-sighted decisions.

Lionel Shriver – applauding the (hopefully firm) decision in Britain to scrap vaccine passports – recognizes that “calculation of risk belongs in the hands of the people. [13]” A slice:

I don’t think we’re doomed. But only if we start acting like grown-ups. On masks, it’s past time we de-politicise them and assemble proper real-life — not modelled — evidence for whether they make a damned bit of difference. From the blizzard of studies and charts I’ve examined, they don’t. But if we’re going to keep making ourselves miserable and turning every trip for milk into a wander on to the set of a dystopian sci-fi flick, that sacrifice has to be based on better science than ‘masks might help, so why not?’ I’m willing to change my mind, but only in the face of hard, convincing data I’ve never seen.

“This is not a joke. The Chinese national hockey team just arrived in Sweden. Seriously afraid of coming to Covid Land. Curious to know how they will dress for match in the graveyard of ambition when it comes to handling the pandemic. [14]” 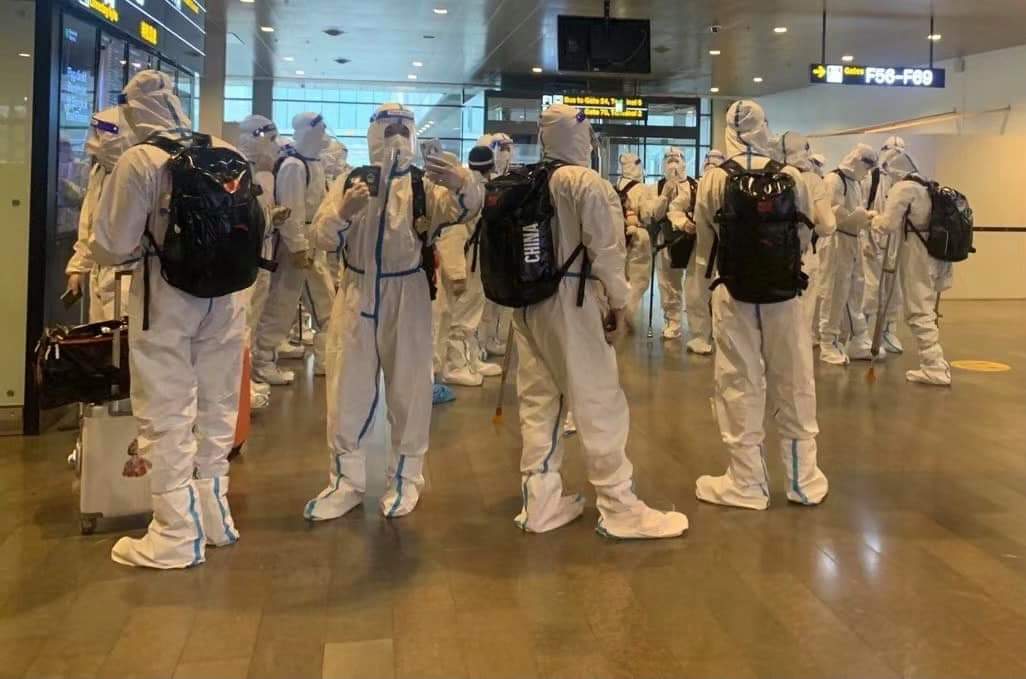 TANSTAFPFC (There Ain’t No Such Thing As Free Protection From Covid.) [15]

Editors of The Telegraph call for an end to all Covid restrictions in Britain [16].

Many Americans self-identify as more rational and scientific than others. With the eventual inevitable realization that Covid could not be squashed and conquered with lockdowns, masks and vaccine induced vs natural immunity, their self-image will chatter. How can we help them?